Each week over a kitchen bench or shared lunch they talk and share stories, while learning how to manage family issues around AOD.

One Local Drug Action Team’s cooking initiative is helping educate refugee and migrant women in Melbourne about alcohol and other drugs (AOD).

It’s also dismantling stigma around AOD and increasing the women’s sense of belonging and connectedness to their community.

Each week over a kitchen bench or shared lunch they talk and share stories, while learning how to manage family issues around AOD.

The ‘Women’s Circles and Global Kitchen’, organised by Multicultural Women Victoria’s Local Drug Action Team (LDAT), provide a safe place for women from many nationalities to come together, without judgement, and support one another. 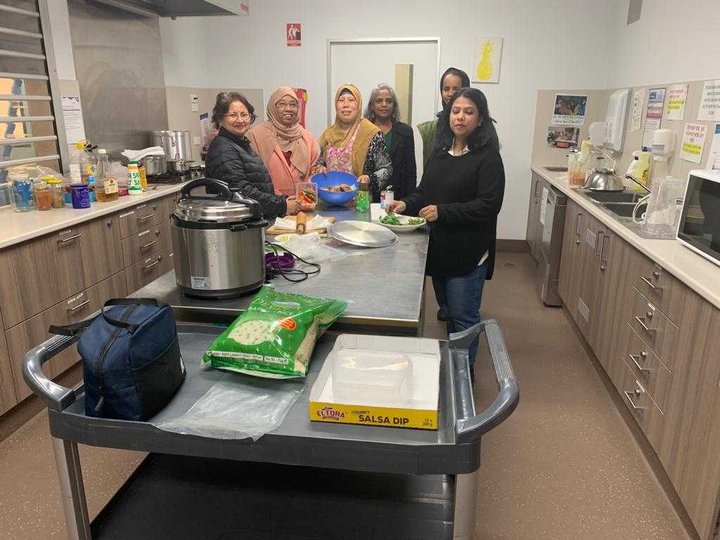 Alcohol and drugs are not openly talked about in many refugee and migrant communities.

There’s a lot of cultural shame, contributing to stigma. Families don’t always know where to go for information, and may struggle to reach out for help.

Jane Farrell, Secretary of Multicultural Women Victoria (formerly called the Victorian Immigrant and Refugee Women's Coalition), believes that multicultural women in a new society often feel they live on the edge of everything.

“They feel uninformed. They wanted to know about various drugs, what they do and how they can tell if a family member is experimenting or [experiencing addiction],” Jane said.

Young arrivals often have access to alcohol, which is widely available for sale in Australia. And, there’s concern that some young people may also be using substances such as ice and nangs.

Empowering women and families with information helps them to reduce the potential harm from alcohol and other drugs.

“Our aim was to lift the lid a little and help parents to help their kids conduct themselves safely.”

Jane says that they didn’t want to take a lecture-type approach.

The LDAT wanted to provide a sense of belonging in a new culture and a pathway for making positive decisions.

The project focused on conversation-based learning in a private space where women were encouraged to ask many questions.

It aimed to empower the participants and build their confidence to have conversations with their children, family and friends. The Having a conversation guide on the ADF website provided a framework for these discussions.

The sessions were delivered to seven Women’s Circles across the west, north and south-east of Melbourne. Training and support were provided to the volunteer leaders. Opportunities for linking in with other local services, centres and councils were explored.

The sessions provided parenting tips, including increasing the women’s knowledge of signs and symptoms of alcohol and other drug use.

“We described what alcohol does to the body, and what each drug does. We explained what a standard drink is. We showed all the words in English,” explained Jane.

“If mothers have the information, they will pass it along and feel strong in doing so.”

Jane says that bonding over cooking works well because no one has to look anyone in the face, which is important when sharing personal stories, especially if kids are involved.

“When women cook they use similar cooking ingredients or methods. It creates a sense that the world can be big but we have more in common with each other than differences.”

It’s all about increasing participants’ sense of belonging and connection to community and equipping them to develop a positive parent-child relationship in a new environment– all proven protective factors when it comes to preventing AOD harms.

Jane says that the LDAT felt supported and mentored by the Alcohol and Drug Foundation (ADF), especially in its first year.

“We translated from paper to action. The ADF gave us information and resources and the space to do what we wanted to do, guiding us in the development of our Community Action Plan. Every step was strongly supported”.

The LDAT has also made good use of the evidence-based resources offered by the ADF.

“The women asked us for tools and tips,” Jane said.

“We show people the ADF website where they can see the resources [on drug effects] for themselves, and we put together a quiz which is on our website.”

Some fantastic outcomes have been achieved.

The project has taken multicultural women into areas that they would normally not talk about, and empowered them with reliable information. They’ve forged a stronger sense of belonging and dismantled stigma around alcohol and other drugs together.

“By being safe and culturally appropriate, we have been able to get a level of sharing. It has given the women a voice, which is the most essential thing.”

According to the participants: they’ve learnt new things, feel less lonely, feel stronger, and have been able to have conversations about topics that they couldn’t have at home.

The LDAT hopes to expand its activities. It looks forward to returning to vegetable and herb growing, an activity that stopped due to COVID. Or even joining a community garden to widen its network.

Future focus will be on grassroots outreach work to support isolated women throughout all of Victoria and connect them to groups to build friendship and reduce social isolation.